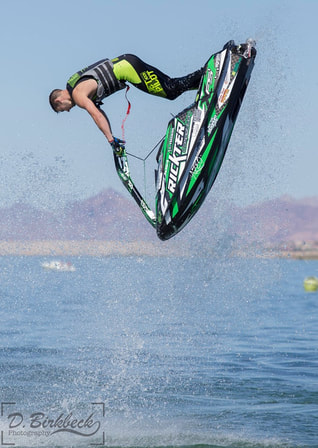 Offering all levels of training and guidance for stand up watercraft riders, beginner to professional and specializing in freestyle trick riding.

Backflip Workshop
Check backflipping a jetski off your bucket list! Tanman and his crew can teach you on a Rickter XFS Carbon Core 1200cc School Ski built by TC Freeride

Freestyle School
Guided freestyle training for all level riders.
Bring your own freestyle ski  - or
- AM's/PRO's can ride a ready to rock Rickter XFS 1200!
​- Beginners/AM's we have Rickter Edges and Kawasaki SXRs available!

Currently working out of Portland Oregon and Lake Havasu City, AZ. June 2021
We travel for training trips and bring the school near you!
​Contact to schedule
Be sure to view our calendar below to see when we may be in a location near you!!

Bring the family and friends on the pontoon boat while you ride!
All Inclusive Trips Available!
​1. Fly into Las Vegas, Nevada! McCarran International Airport
2. Get picked up by The Tanman!
3. Go ride a Rickter Ninja 1200 in Lake Havasu for up to 7 days!
4. Ride until you're arms fall off at the world capital of jet skiing, Body Beach!
5. Charter our wake surf boat with TC Freeride!

​Now you can have the chance to do a flat water backflip on a Pro Freestyle 1200cc Rickter XFS!
With enough demand lately, we have decided to put together a program where anyone with stand up jetski riding experience can come try their hand at flatwater backflipping my Rickter XFS Ninja 1200 with my guidance.

We use waterproof BB Talkin' communications devices to communicate directly with you as you're riding to make training more effective! You will be able to hold a conversation with your instructor the entire time you're riding!

We are the premiere source in the Western US to test out this level of watercraft before you purchase one yourself!
Come take the opportunity to hop on some of the most impressive equipment in the world! A $35,000 Rickter XFS standup watercraft with 180+ HP!

We have teamed up with Freestyle Connection to help the East Coast riders.

Check out the BB Talkin' Waterproof headsets!!
The New B.B. Talkin’s new Advanced system into some new Bell Helmet! Big thanks to DCor Visuals for the Bell ambassador connection and B.B. Talkin’ USA we have a rocking new super lightweight freestyle helmet.
These BB Talkin's are how we revolutionized the way people can learn to ride a stand up water craft.
​
https://www.bbtalkinusa.com/
​

Tanner, my friend. Because of you, my dreams became true. Apart from a wonderful person you are such a good trainer, because you succeeded in one week to teach me the technique and achieve my target. From my heart thanks for all and I wish to you the best.

I’ve been riding freestyle jet skis for about a year now, and when I heard about the TNT Freestyle School, I figured it was something I should look into. Before I reached out to Tanner, I had been playing around with a few tricks, but was completely self-taught. The sport isn’t the most well-known, so it’s tough to find people who ride that can push you and help you progress.
I was pleasantly surprised that when I reached out to Tanner he was both professional, and really eager to help out. He’s a regular dude who loves jet skis and genuinely wants to help out anyone interested in the sport.
In just a few hours, he helped me progress probably more than I had in a whole year riding by myself. He not only evaluated and helped me tweak the way I ride, but he helped out with ski setup, body positioning, and even pre and post ride maintenance. It was a game changer. If you get out to see him in Lake Havasu or can catch him while he’s in your area, taking his class is something you can’t afford to miss out on. Whether you’re a freestyle competitor, a weekend warrior like me, or someone who just wants to do a backflip, the TNT Freestyle School is the way to go

Tanman is the sh*t, this was the best money I've ever spent! Best day of my summer! I just went out there and got to send it on one of the most bad ass skis around!

Come be a part of our TNT Bomb Squad with a training and get your sticker pack, Jet Pilot Riding Gloves and Bomber Eyewear products after working with Tanner.